Mark Edward Hall is a marvel in the horror genre.

He’s published numerous novels and novellas – many of them self-published – but each and all have proved very successful with just the right balance of visceral and psychological terror.

I had the privilege to read The Haunting of Sam Cabot, published by Damnation Books in 2009 and it grips your very soul and doesn’t let go. It goes without saying that I’ll be reading more of his work in the future.

Therefore, I had to find out more about this author and explore how he brings his incredible tales to life:

Why do you write horror?
I grew up with TV shows like Twilight Zone, The Outer Limits and Boris Karloff’s, Thriller. When I was a kid I read Dracula, I Am Legend, the works of Poe, Hawthorn and H.P. Lovecraft. I was just drawn to those sorts of tales. They seemed to tell me more about the human condition than what society as a whole was trying to feed us. Also, my grandmother Luella was a medium and fortune teller and because I was the only grandchild interested, she chose me as a listening post for her oral tales of ghosts and the supernatural. To me these types of stories were thrilling. They still are.
So the long answer to a short question is, horror is where my mind goes when I sit down to write. But horror alone isn’t enough. I’m actually not fond of slice ’n dice just for its own sake. There has to be some reason for things and there certainly has to be at least one good twist to every story, otherwise it’s not fun.

Tell us about how you came to be an accomplished horror writer?

I feel sort of like I came in through the back door. I came to this a little later in life than most writers do. Not that I haven’t always been a writer. I started out as a song writer and wrote poetry and short stories when I was young. I still run into old friends who remember me telling them spooky tales, and they’ll say, Mark, are you still telling those horror stories? And I say, yup, only now I write them down. When I was eighteen I started writing a novel at my older sister’s kitchen table. I was determined to make it work. We were from a small town with lots of sinister little secrets. At least in our minds. The novel was going to be a blend of Peyton Place with some macabre elements thrown in for shock value. It never got finished and when I went in the army the manuscript got lost.

But I never lost the yearning to write novels. Years later when my wife and I settled in Richmond, Maine I decided if I was going to do it, I’d better get started, so I began the epic supernatural thriller, The Lost Village. It took me five years to write, working on it part time while I worked a full time job and played in my rock band on weekends. Because of its length I couldn’t get a single publisher to read it. So I published it myself. It was subsequently recommended for a Bram Stoker award and nominated for a tombstone award. It got me a lot of attention, and I began selling my short stories to magazines and anthologies. Damnation Books picked up The Lost Village and re-issued it last September.
Since then I’ve written seven more novels, four of which have been published and two new ones coming this year.
Now, with the publishing industry in such chaos, and the advent of devices like Kindle and Nook, my stuff is being read like never before. I’m very happy with what’s happening. A lot of my writer friends, people like J.A. Konrath and Scott Nicholson have decided to go it alone as well, and so that’s what I’ll be doing for the foreseeable future. My next two books will be self-published. I like having ultimate control over my own work. Self-publishing used to be a bad word. Not any more. It’s the future.

What do you lean towards, supernatural or psychological horror?

I like them both. All my novels contain elements of both supernatural and psychological horror.
One of my new books, however, will probably be considered a thriller. It’s called Cross my Heart & Hope to Die, and it is a fast-paced thriller with some mild supernatural elements. I like it a lot and I think it will open up an entirely new readership to my books.

The usual stable of great authors: Stephen King, Clive Barker, Dan Simmons, Simon Clark, Robert McCammon, Whitley Strieber, Brian Keene, John Shirley, and some old masters like Richard Matheson and John Farris. Farris is amazing. There are really too many to name. I like a lot of the science fiction greats as well, Asimov, Herbert, Bradbury, Arthur C. Clark.
You’re also a singer/songwriter… has songwriting made you a better storyteller? What’s harder – writing a song or writing a short story.
I think songwriting and story writing are the same thing. Either way, you’re telling a story. I believe, at least as far as I’m concerned, that each makes the other better. At this stage of my life I like writing stories better, especially novels, but I still write songs. Actually I’m involved in penning a new song for my band right now entitled Burn so Bright. It has a Pink Floyd sort of feel to it. When it’s finished and recorded I’ll put it up on my Facebook and Reverb Nation profile. I think it’s a really good song. 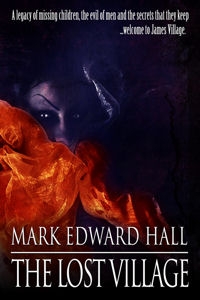 What piece of writing are you most proud of?

I like The Lost Village a lot, but in truth there’s a novel no one has seen yet entitled Angel Island that I’m really fond of. It’s an epic blend of scifi, horror and adventure that takes place in two worlds. Think of Clive Barker’s Imajica. I’ve been working on it for almost ten years and some day I hope it will see the light of day.
E-books are becoming more popular by the day…you have made some of your work available via your site and even given it away for free. Why?
I have a philosophy that says, the more you give away, the more it will come back to you. It’s an old eastern thing that goes something like that anyway. I don’t mind giving stuff away because it brings a bigger audience to my work. I’ve proven that. I’d give it all away if I could afford to.
I’m not the only one who does that. New York Times bestselling author Scott Sigler built his career by giving away audio podcasts of his books. He still does. Every single work of fiction he has out is available for free on his website as an audio podcast. I am working toward that goal myself. I understand that times are tough and that there are a lot of people out there who love to read and can’t afford books. I offer all of my books and short stories I own the rights to for free to whomever wants them. And you know, people still buy them.
J.A. Konrath does the same thing. A lot of his work is offered for free. I think it’s not only a smart thing to do but it’s the right thing to do.

As I said earlier, I have at least two new novels coming this year, Cross my Heart and Hope to Die, and Soul Thief which I have been offering for nearly a year now as a free serial novel on my website a chapter a week. As soon as it’s finished, it will be published, but I’ll still leave it free on my site. Also, I hope to finish another novel this year that’s more than half done. It’s a post apocalyptic horror/thriller entitled On the Night Wind. (alien zombies. Ain’t they cute?) Plus there are many more projects in store, including all of my works becoming audio books. I’m very excited about the future. I feel like I’m just getting going.


For more information on Mark’s work, visit his website www.markedwardhall.com