Allure of the Ancients comic strip in Midnight Echo #5

So my first published comic strip features in the pages of Midnight Echo Magazine Issue 5!

This story, penned by Mark Farrugia was a fun challenge for me and it’s great to see it joining the ranks of some of the best horror authors from around the world.

This comic carries even more significance because it attracted the eye of Rocky Wood and put into motion our collaboration, which will ultimately become Witches in 2012. And you never know you might see more chapters of Allure of the Ancients in the near future!

As a treat, below is a sample page from Allure, showing the roughs I did first and then the finished product. I hope you like it: 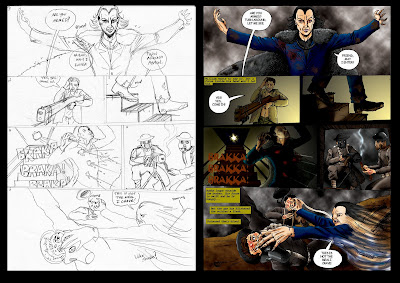 Midnight Echo is the magazine of the Australian Horror Writers Association and is put together by highly talented volunteers from the AHWA. Issue 5 is edited by Leigh Blackmore.

To purchase issue 5 in either PDF or print formats visit http://www.australianhorror.com/index.php?view=115