In part 2 of my interview with Rocky, he talks about how he became involved with the Horror Writers Association, his struggle with Motor Neurone Disease and his forthcoming authorial works.

How did you get involved in the Horror Writers Association? 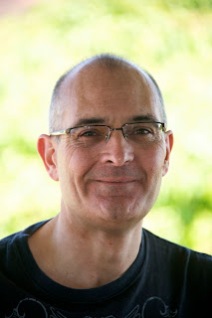 When I realized my foreseeable writing future was going to be tied to the horror genre I decided to join the premier writers’ association for that genre, which is of course the HWA. I was welcomed whole-heartedly and immediately.
Quite soon thereafter I got a Bram Stoker Award nomination for ‘Stephen King: Uncollected, Unpublished’ and so I decided to travel to Toronto and attend the Awards. Again, a whole-hearted welcome and I made friends that weekend who are still my good friends in the community today.
I am not one to join and watch other people do work. Over the years I have had leadership positions in political parties, environmental groups, sporting clubs, and organisations like the Australian American Association, mostly when I get involved its ‘boots and all’. So, when I decided to help HWA it was going to be all or nothing.
The first time I ran for Trustee I failed to get elected (yikes!) but I didn’t give up and was elected the following year. Two years later I was tapped for President, presumably on the basis of my efforts.
What many people don’t realize is that today’s HWA is delivered to our members by about 100 (yes, one hundred) volunteers, all working away quietly in the background. They range from the Board to the Web team, through the Juries and on to areas like the Membership Committee and the Bram Stoker Awards Committee.
I credit any success the HWA has had in recent years to its leaders (such as Deb LeBlanc, Vince Liaguno, Marge Simon and Lisa Morton) and to all these volunteers who believe in our mission enough to give up their spare time (and writing time at that!) to help strengthen the Association and deliver our daily needs. And that’s lots more in the planning tray by the way.
Horror has been a massive part of your life…does it still have the same meaning today? It’s changed so much with the evolution of the e-book. Where do you see its future?
That’s the $64,000 question, isn’t it?
Horror is the original genre, probably the original form of oral story-telling around the cave-people’s fire. It’s not going away, ever.
The e-book (and I believe that is only in its infancy) won’t change the basis of the genre – which is story. It just changes the delivery mode, making it even more accessible. It has its dangers – there’s some real crud being self-published, but that will self correct and there’s plenty of really good material coming to light in ebooks that wouldn’t have got published in print.
The ebook has so far to go – the inclusion of hyperlinks, research material, still graphics and live video, all of which will enhance the reader’s experience.
And I am one who believes the printed book will never leave us (maybe I’m an optimist) – even if it means people will use Print on Demand to buy a book they treasure and want to display in their home or office, after they read it electronically. All change brings both opportunity and challenge, and the same applies to the horror genre.
We must try to stay with the curve without over-reacting or missing our chances. We can experiment and fail, that’s okay. To me there are more than enough horror writers and small press publishers to try out all the new opportunities as they come along. Some will lead, some will follow, some will wither away. That’s life.
Last year Horrors: Great Tales of Fear and their Creators graphic novel was published by McFarland, with Glenn Chadbourne as artist. How did the idea come about – and why a graphic novel? 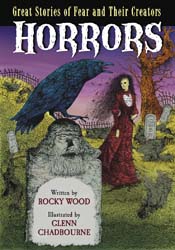 
Read part 1 of this interview HERE