Posted on December 1, 2011 by darkscrybe
Gary W. Olson may be new to the horror fiction scene, but he’s already well on his way with his debut novel Brutal Light, which was released by Damnation Books on December 1. He took the time to answer a few questions about the book:
Tell us about your forthcoming book Brutal Light. Going by first appearances your tale seems to be your typical good versus evil tale, but with a twist on the norm with light having negative connotations. Is that the case?

Somewhere in my readings–unfortunately, I no longer have notes as to where–I encountered a description of a rather extreme form of asceticism.  In it, all flesh–and possibly all matter–was considered imbued with sin and darkness, and the only way to escape this darkness was through intense prayer, self-flagellation, and other such masochistic practices.  It was a stark worldview, admittedly, one that carried the formula of ‘light equals good and dark equals evil’ to extremes, but it got me to thinking about what we mean by these terms.  If the difference between ‘light’ and ‘dark’ really was this stark, how many of us would really be willing to go to these ascetic extremes to avoid ‘evil’?  How many of us would rather just redefine the terms so that they’re not so terrifying?
It’s not that the Radiance–the ‘brutal light’ of the title–is negative, per se.  It’s more that it may be more than our finite minds might be capable of processing if we ever truly experienced it prior to dying.  Nor is it necessarily true that ‘darkness’ is synonymous with ‘evil’, the protestations of any ascetics notwithstanding.  I tend to see it as all that our finite minds can encompass, with all the elements of ‘good’ and ‘evil’ as we understand them contained within.  The conflict between ‘light’ and ‘dark’ becomes very different in this context.
This is your first novel, undoubtedly a writer’s most important work – give us a bit of an insight into how you began – where the idea came from, how long you worked on it for etcetera?
I’ve long been fascinated by the subject of power–its nature, its effects, the lengths people will go to get some, and why they want it so badly.  I wrote stories in the nineties that involved characters who either strove for or ultimately achieved some form of limitless power, and had to contend with the consequences–temptation, corruption, hubris, and so on.  When I started attempting to write novels later on, I continued with and expanded on these themes.
It wasn’t until I encountered a quote by Arundhati Roy–‘respect strength, never power’–that I found a focus for my exploration of these themes in Brutal Light, though.  Power comes from without–it ‘grows from the barrel of a gun,’ to paraphrase Mao.  Strength comes from within.  The story, then, centered on the pursuit of power as a substitute for strength, and the consequences.
Why horror/dark fantasy?
Dark fantasy and horror are excellent vehicles for exploration of questions of identity, for coming face to face with ‘who we really are,’ and having to make choices following this revelation.  It uses some very visceral tools, from atmospheric dread to flesh-eating zombies, to heighten the impact.  There’s nothing like a demon for uttering a harsh and merciless lie–or worse, a harsh and merciless truth.  The prospect of having to look beneath the identity we create for ourselves and seeing what–if anything–is beneath the comforting words and conventions is a quietly terrifying idea for most people.  Exploring this in a horror context raises the volume in a big way.
What was your first foray into dark fiction?
My first dark fiction foray was a short story I wrote in the late nineties called “The Body in Motion.”  It was set on an Earth so far in the future that the sun had begun its expansion into a red giant, and the remnants of humanity were kept barely alive in deep underground chambers while the Artificial Intelligence charged with saving these remnants experimented with a radical means of doing so.  It appeared in Outer Darkness magazine in the Spring of 1999.
Working on anything new at the moment? 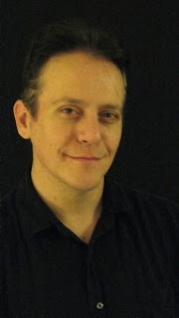 Two things.  One is the sequel to Brutal Light, which is threatening to grow beyond all the bounds I want to set for it.  I can’t tell too much about what will be in it at this point, without spoilers for Brutal Light, but I can say it will have a lot of nasty, multi-legged, memory-devouring bugs.
The second, and the one that will likely be completed first, is Entering Cadence, a science fiction novella set in a settlement in a jungle on an alien world.  None of the races are there by choice, and none can stop more members of their races from arriving.  Then someone who does seem to have at least some of the answers arrives… but he may not be allowed to live long enough to spill them.  It’ll be a pulpish adventure with strong dark elements to it–it should be a lot of fun to write.
Your influences/ favourite authors?
There are so many of these.  Isaac Asimov, Arthur C. Clarke, and Frank Herbert were strongly influential to me growing up.  Stephen King and Clive Barker gave me a taste for visceral, weird horror.  Philip K. Dick, Avram Davidson and Terry Pratchett all influenced me with their inimitable voices and ways of taking something apart and looking at it in new ways.
Do you have a writing regimen?
Unfortunately, I’m not as ‘regular’ at writing as I used to be.  I tend to carve out time wherever–in the morning before I go to work, in the late evening when I should be sleeping, at odd times on the weekend.  Every time I tell myself I’m going to get organized and write consistently for a certain length of time starting at a certain time and ending at a certain time, it never seems to work out.  But the writing gets done anyway, so I don’t fret much about it.
When you’re not dreaming up dark delights what do you do to pay the bills?
I’m a software engineer/data warehouse analyst for an insurance company.  As day jobs go, it’s pretty good–I’ve always enjoyed programming work, and the process of tracking down problems and fixing them requires a lot more creativity than I think most people expect.
Where can people find you on the web?
I am spread widely upon the Net; my user accounts are legion.  The best place to start is my website, at http://www.GaryWOlson.com.  There you’ll find my blog, which always has the latest on whatever I’m up to, and links on the right-side column to everyplace else I’m lurking on the Internet.  Most notable of these are Twitter (http://twitter.com/gwox) and Facebook (http://www.facebook.com/gary.w.olson.author), though that’s only the start.
Synopsis for Brutal Light:
All Kagami Takeda wants is to be left alone, so that no one else can be destroyed by the madness she keeps at bay.  Her connection to the Radiance–a merciless and godlike sea of light–has driven her family insane and given her lover strange abilities and terrible visions.  But the occult forces that covet her access to the Radiance are relentless in their pursuit.  Worse, the Radiance itself has created an enemy who can kill her–a fate that would unleash its ravenous power on a defenseless city…
Rhea Cole is also on the run, after murdering her husband with a power she never knew she had–a power given her by a strange girl with a single touch.  Pursued by a grim man unable to dream and a dead soul with a taste for human flesh, she must contend with those who would use her to open the way to the Radiance, and fight a battle that stretches from the streets of Detroit to a forest of terrifying rogue memories.
Buy links:
Amazon.com (Kindle edition): http://www.amazon.com/Brutal-Light-ebook/dp/B006EVZYIC/
DamnationBooks.com (.mobi, .epub, .lit, .pdf, .pdb): http://www.damnationbooks.com/book.php?isbn=9781615725380
Links for of all other vendors (continually updated): http://BrutalLight.GaryWOlson.com
Print ISBN (for ordering paperback via bookstore): 978-1-61572-539-7
Digital ISBN: 978-1-61572-538-0