During a trip to Brisbane last weekend to take my two daughters down to visit their mother who has been on four weeks training for her job, I managed to meet with fellow author Stephen M. Irwin. 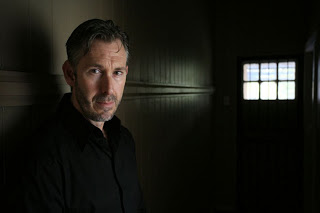 Irwin is the author of the fantastic horror thrillers The Dead Path and The Broken Ones (both from Hachette Australia) and having read and thoroughly enjoyed his books it was great to meet him face-to-face and talk shop.

During our chat, Steve I discovered we had a lot in common: we both have a media/public relations background; we’re both creative outside of our writing (illustration for me and film production for him), a mutual fear of spiders (which feature prominently in The Dead Path) and we also have young children.

Steve had some nice things to say about my latest novella The Noctuary and even asked if the demonic Muses that torment my poor writer Simon Ryan, were real.

Amongst other topics, we discussed “genre labelling”, literary agents and finding time to write between full time jobs and parental responsibilities. Steve also gave me an insight into the new novel he’s working on which will see the return of some of his characters from The Dead Path.

Although our chat was brief I went away feeling even more motivated than ever and somewhat glad to be able to talk about writing with someone who knows and loves the trade.

Once back home, I was happy to see the latest copy of Cemetery Dance Magazine – #65 had arrived in the mailbox.

Within its pages was an interview with one of my favourite horror authors Graham Masterton and he too revealed that he was once a journalist (what does this say about journalists though – is there a horror writer in every journalist, just waiting to escape?) I saw some pretty bad stuff in my eight years as a newspaper reporter, but I’m yet to harness any of it in my writing, still there’s no doubt that the people I interviewed during that time left their mark.

Another piece of wonderful news was to hear that my friends Rocky Wood and Lisa Morton, who I worked with on the graphic novel Witch-Hunts: A Graphic History of the Burning Times, have been nominated for a Bram Stoker Award in the categories of Superior Achievement in Non-Fiction and Superior Achievement in a Fiction Collection respectively.

For the full list of nominees (and congratulations to them all!) visit www.horror.org/stokers.htm

For more about Stephen M. Irwin and his books, you can visit his site HERE