Posted on July 29, 2012 by darkscrybe
I’m very honoured to have Lee Battersby, one of Australia’s foremost speculative fiction authors agree to this interview where he talks aboput his forthcoming debut novel
The Corpse-Rat King.

I was very fortunate to read an ARC of The Corpse-Rat King and you’ll find a link to my review of the book at the end of this interview. But now I’ll let the man speak for himself:

Tell us about your upcoming release The Corpse-Rat King from Angry Robot books. How did the story idea emerge?

‘The Corpse-Rat King’ tells the story of Marius dos Helles, a professional looter of battlefields and Olympic-quality coward, who is mistakenly acclaimed King of the Dead. The King is God’s representative on Earth, and they have not been admitted to the afterlife so they need one to talk to God and remind him that they’re down here, waiting. Once they realise that Marius is no King, they send him to find one. And as they say in the TV papers, hi-jinks ensue. It’s irreverent, highly cynical, and everyone says ‘fuck’ a lot more than they’re supposed to.
The idea originated from a dinner party conversation with Dave Luckett, a friend and fellow writer I’ve admired for many years. We were bemoaning some of the more obvious fantasy tropes, particularly those of the “everybody’s noble and shampoo seems to have been invented 500 years early” soft-focus variety. I started out to see if I could write something with some grit under the fingernails, and once I got started, my natural inclination to undermine everything and be ludicrous came bubbling out.
CRK is very character driven, one man’s quest to find the meaning of his life through his death. Does that mean Marius came into being in your mind easily and just how much did he drive your tale? 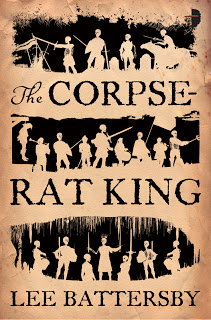