Right now I’m inking pages for the next chapter of the vampire comic Allure of the Ancients: The Key to His Kingdom (written by Mark Farrugia), which will be appearing in issue 8 of Midnight Echo Magazine.

Yesterday the folks at Midnight Echo released the Table of Contents for issue 8 and it really did put things into perspective. Allure will be featuring in the issue alongside horror greats such as Joe R. Lansdale, Jack Ketchum and Lucky McKee. Reknowned horror artist Glenn Chadbourne will also have some new artwork in the issue. Felicity Dowker, Jason Fischer, Andrew J McKiernan and Jason Nahrung also lead a strong contingent of Aussie spec-fic writers.
Here’s the full TOC:
It’s with great excitement that the Midnight goblins release the Table of Contents for the upcoming Midnight Echo Issue 8, edited by Amanda J Spedding, Mark Farrugia, and Marty Young (due out on November 30).
Note: we also have a few advertising spots left, so please read on for details.
The Table of Contents:
Literature
A Visit With Friends by Joe R Lansdale
The Girl from the Borderlands by Felicity Dowker
Blissful Ignorance by Matthew Wedge
Hello Kitty by Jason Nahrung
Jar Baby by Michelle Jager (with artwork by Glenn Chadbourne)
The Boy With the Hole in his Heart by Caysey Sloan
They Don’t Know That We Know What They Know by Andrew J McKeirnan
Squirrely Shirley by Jack Ketchum and Lucky McKee (with artwork by David Schembri)
Always A Price by Joanne Anderton (AHWA Short Story winner 2012)
Blood Lillies by Shauna O’Meara (AHWA Flash Fiction winner 2012)
Tooth by Kathryn Hore
Pigroot Flat by Jason Fischer
Poetry
Gallows & Blooms by Andrew Alford
Insatiable by Stuart Olver
Coming Home by Marge Simon and Sandy DeLuca
Comic
Allure of the Ancients; The Key to His Kingdom – story by Mark Farrugia, illustrations by Greg Chapman
Special Features
In the Art, The Dark: Glen Chadbourne
Facts, fiction and fevers by Gary Kemble (non-fiction)
An Interview with Jack Ketchum
An Interview with Lee Battersby
Regular Features
A Word from the AHWA President – Geoff Brown
Tartarus – Danny Lovecraft (poetry column)
Pix and Panels – Mark Farrugia (comic column)
Black Roads, Dark Highways #3 – Andrew McKiernan (column)*
Sinister Reads (all the latest releases from AHWA members)
Pre-orders for the limited print edition are now being taken. Please click here for full details: http://midnightechomagazine.com/2012/09/17/table-of-contents-for-issue-8/
We have a couple of spaces left for advertising, both full and half page, but time is short. If you’d like to take one of these places, please contact us at the email address above for more details. All artwork will be needed by the end of the month.
* Issues 1 and 2 of Andrew McKiernan’s column, Black Roads, Dark Highways, were first published in Black magazine in 2008. Issue 1 of this column will be republished on the Midnight Echo website at the end of September, with Issue 2 published online at the end of October.
Allure first appeared in a one-off chapter in Midnight Echo #5 and this new storyline, The Key to His Kingdom, began in issue #7. Looking at this cast of speculative fiction greats I feel very humbled to be sharing space in the magazine with them.
Allure will be a part of at least the next two issues of Midnight Echo after issue 8, so if you prefer your vampires to be of the unsparkly variety, please feel free to check it out in the pages of the Australian Horror Writers Association’s official mag.
As a bit of a taster, here are a few sample pages (minus the text) from the upcoming chapter of Allure: 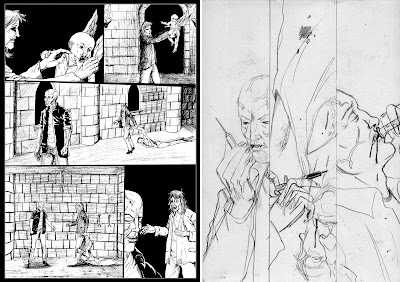