At 9pm Eastern Australian time Friday April 12 (in other words, tomorrow!) the winners of the Australian Shadows Awards will be announced and I’m proud to say that I played a big part as a judge this year!

I was very fortunate to be selected as a judge in the Short Story, Collected and Edited categories this year and it was an absolute pleasure just to read works by other authors.

It was quite daunting when I accepted an invitation to be a judge. I thought – what gives me the right to judge other author’s work, especially authors who have been writing for decades and pass judgement on them!? I mean I’m just a newb! What would I know? But then I realised I had to put the writer in me to one side and judge from a reader’s perspective and as an avid reader of speculative fiction, I know what makes a good story.

In the end I devoured six collected works, eight edited works and more than 80 short stories in the space of about 6-8 months. Thousands of words; writers pouring their hearts and souls on to the page. Many of the tales resonated with me, while others lingered with me for days. They were the successful ones.

When it came to finally deciding upon the winners it seemed my fellow judges (Stephen Clark and Steve Gerlach) and I, were all on the same page from the outset. I’d like to thank the “Steves” for the opportunity to collaborate. I’d also like to say thank you to Australian Shadows Awards Director Robert Datson for managing the process with a great deal of professionalism and patience. 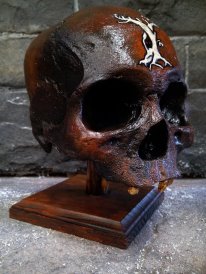 I trust that you agree with us when the winners are finally announced.

After seeing the trophies the authors will be receiving I’ll admit that I felt the sting of jealousy, but then I remembered I received an even more precious gift, the chance to read a multitude of talented authors and experience their stories for the first time.

Congratulations to all the winners and finalists – you deserve it.