The films and TV shows that taught me about fear

Most of us remember the first scary movie or TV show we saw as a child, right?

I seemed to be exposed to scary films whenever I visited my older cousins or the neighbours. As they were in their teens they usually had something freaky going on the screen.

I recall seeing several scenes from A Nightmare on Elm Street and being absolutley terrified (the scene of the young woman being dragged up the ceiling and slashed to ribbons for one).

Another film was An American Werewolf in London. The scene of one of the travellers being ripped apart, and the strange scene in the hospital with the nurse being stabbed, still linger in my mind to this day. 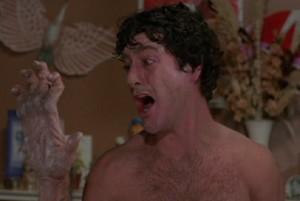 That was the thing about horror movies back in the 80’s wasn’t it? The fact that there were so many of them.

I also grew up with Doctor Who – it was a science fiction show, yes, but during the Tom Baker years (my first Doctor), particularly the early seasons under the guidance of producer Phillip Hinchcliffe, many of the stories had a very dark undertone.

Many of the monsters scared the crap out of me, especially the Zygons, with their mishapen bodies and organic technology. Everything looked like raw meat.

Doctor Who scared me and taught me about fear as part of narrtive, and I think some of the techniques used in the stories of the early Tom Baker years stuck with me.

As far as TV goes in my teenage years, the only show that I truly couldnt do without was The X-Files. To me this sure was an extension of Doctor Who, but in a much more adult context. Who can forget the liver-eating monster Eugene Victor Tooms contorting himself into roof spaces to hunt for human prey? 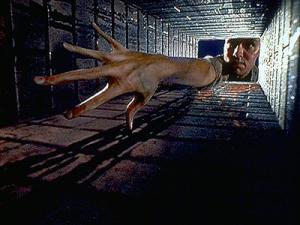 I never missed an episode of The X-Files and again, the depth of fear and atmosphere exhibited in its early years definitely resonated with me and my own storytelling endeavours.

There are still some good horror-based TV shows running today. I regret to admit I havent watched The Walking Dead yet (I’ve read some of the comics), but I’ve enjoyed shows such as American Horror Story and Being Human – and of course, the new series of Doctor Who!

What horror TV shows and movies have influenced your early horror development?

I am a dark fiction author and artist from Central Queensland, Australia. I've penned four novellas: Torment, The Noctuary, Vaudeville and The Last Night of October. I also illustrated the Bram Stoker Award-winning graphic novel, Witch Hunts: A Graphic History of the Burning Times.
View all posts by darkscrybe →
This entry was posted in Uncategorized and tagged a nightmare on elm street, an american werewolf in london, doctor who, film, horror, television, the x-files. Bookmark the permalink.