The Last Night of October Excerpt

With Halloween just nine days away I thought I’d celebrate early and post an excerpt from my Halloween-themed novella, The Last Night of October, which is out now from Bad Moon Books in trade paperback and on the Kindle.

This is from the second chapter of the novella where Gerald’s worst nightmare, a boy who comes back each year to knock in his door on Halloween, is inadvertently let inside by his naive hospice nurse Kelli. This is the first of many chilling, claustrophobic scenes:

As she reached for the handle she heard Gerry take in a sharp breath. She turned to see his face was stark white, his eyes bulging and locked on the door behind her.

Oh no, not again.

A voice in her head told her to get away from the door; that it presented an immediate danger. Instinct simultaneously told her to run and stay still, yet her heart had already broken into a sprint. Beneath that desire to live however, was the even more powerful need to know.

There was a rap-rap-rap at the door.

Kelli jumped at the noise and whirled back to face the door. Through the dirty glass view panel, she could make out the silhouette of a child standing on the other side.

The child, a boy, from what she could tell, stood bolt up- right, like a statue. Kelli could make out the faint outline of the costume he was wearing; some sort of enlarged headpiece or mask and a tattered suit jacket and trousers.

She turned to Gerald and the smile was wiped from her face. The old man was trembling in his chair, his head shaking from side to side in denial. He gazed, unblinking at the boy and those eyes exuded fear.

‘Mr Forsyth?’ Was he having another attack? No, this was something far worse; his entire body was infected with terror.

‘Don’t!’ he said and sucked in a new breath.

‘Don’t what—it’s only a boy.’ She moved to open the door.

Kelli rifled inside her handbag. ‘I’m just going to give him some candy, ok, and send him on his way.’

Gerald tried to stand, as if to stop her, but her hand was already turning the doorknob and pulling the door wide open. The little boy—about ten years of age, she surmised— never shifted or acknowledged her. He simply looked straight ahead—at Gerald Forsyth.

‘Hi there,’ Kelli said, but still the boy played statues.

The boy was short for his age, Kelli thought, but with the door open she could now get a better look at his costume. He wore a large Frankenstein headpiece—complete with rusty- looking rubber bolts at the temples—which made him appear a foot taller. Kelli gazed in wonder at his make-up; a rough mixture of putrescent greens and purples to capture an accurate depiction of a creature composed entirely of reanimated flesh. The suit he wore was charcoal grey, with some brown-coloured stains on the lapel, elbows and knees.

The boy’s large black boots were neatly side by side, jutting against the threshold. Kelli crouched down to smile at him; the boy’s pale grey eyes looked dead ahead. She followed his eye line and found Gerald at the end of it, still trembling and paralysed with fear.

Why on earth would a grown man be afraid of a little boy?

‘Get…get away!’ he said, through gritted teeth.

Kelli stood and thrust her hands on her hips. ‘Oh, this is getting ridiculous! What is it with you and Halloween—it’s just harmless fun!’

Gerald shook his head and she sighed and held out a packet of pumpkin head caramels to the boy.

‘Here’s your candy,’ Kelli said. ‘Why don’t you come in so we can get a better look at your amazing costume?’

Kelli was truly annoyed with the old man’s attitude now. She’d tried in vain to get him to open up about it and he refused; he was just a grumpy old man griping at the younger generation. Ironically, Gerald Forsyth was behaving just like the thing he so despised.

‘I’m sorry, Mr Forsyth, but this is my candy and I’m going to give it to him.’

Kelli heard the door close and double clip-clop sound of shoes on the floorboards.

‘Good boy,’ Kelli said, returning her attention to the boy.

‘Here you go.’ She frowned when he didn’t take the candy. ‘You don’t want them?’

The little Frankenstein kept up his staring contest with Gerry.

‘You’re a quiet one, aren’t you? Well here you go then.’ She tucked the packet into the breast pocket of the boy’s jacket. She smoothed down the shoulders of the jacket and picked off a piece of dirt. ‘This your first trick-or-treat then?’ She chuckled.

‘I remember my first time too. I was so nervous, but I had a group of friends to go with. She glanced at the front porch. ‘No one came with you though, huh?’

Franken-boy and Gerald’s gazes were locked on and Kelli wondered if either of them had blinked. She reached out and gently took hold of his chin and turned his face to face her.

‘You’re freezing!’ she said, retracting her hand away.

‘Get out of my house!’ he shrieked.

Kelli tutted. ‘Come on—we’d better leave Mr Forsyth in peace.’ She gripped the boy’s shoulder to lead him out, but he wouldn’t budge. When she tried to open the door, the knob wouldn’t move either. ‘Oh, I must have turned the lock when I closed it—silly me.’

Gerald began to sob. He sank his face into his hands.

‘The lock’s stuck,’ Kelli said, flabbergasted. A twinge of panic began to creep into her chest. She looked at the boy looking at Gerald. He hadn’t moved in so long; hadn’t even blinked. She glanced at his nostrils and chest.

Is he even breathing?

She yanked on the door, but it didn’t even rattle. ‘Mr Forsyth, the door won’t open.’

The old man began to scream, his voice hoarse and ragged, like he was choking on a hundred marbles. The boy seemed unperturbed by the fact the old man suddenly seemed to be suffocating.

‘Did you lock the door?’ she asked the boy.

Then the child Frankenstein turned to look at her, as if noticing her for the first time. Kelli glimpsed something dark and hungry in his eyes, something that wanted to drink in her fear. As she tried to fathom what was happening, a trickle of blood suddenly erupted from the boy’s left nostril, all over his jacket. 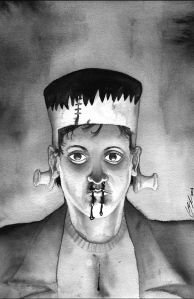 The trickle became a flood, as a torrent of dark blood escaped both nostrils, spilling violently all down the front of his costume, spattering his shoes and pooling on the floor. Kelli jumped out of the spray and instantly reached for the tissues in her bag.

She reached out with the tissues to pinch the boy’s nose, but before she could, he opened his mouth impossibly wide and released a great regurgitation of blood all over her arm. The geyser of blood that hit the floor was far too much for a ten- year-old boy to sustain. When the Frankenstein child smiled widely at her, through oozing red lips and looked down at the floor to admire the mess he’d made, Kelli screamed.

If you enjoyed that, you can pick up a copy of the trade paperback from the Bad Moon Books website, or grab a Kindle copy on Amazon.

Two-time international Bram Stoker Award-nominee®*, Greg Chapman is a horror author and artist based in Queensland, Australia. Greg is the author of several novels, novellas and short stories, including his award-nominated debut novel, Hollow House (Omnium Gatherum) and collections, Vaudeville and Other Nightmares (Specul8 Publishing) and This Sublime Darkness and Other Dark Stories (Things in the Well Publications). He is also a horror artist and his first graphic novel Witch Hunts: A Graphic History of the Burning Times, (McFarland & Company) written by authors Rocky Wood and Lisa Morton, won the Superior Achievement in a Graphic Novel category at the Bram Stoker Awards® in 2013. He is also the current President of the Australasian Horror Writers Association. Greg lives in Rockhampton with his wife and their two daughters. * Superior Achievement in a First Novel for Hollow House (2016) and Superior Achievement in Short Fiction, for “The Book of Last Words” (2019)
View all posts by darkscrybe →
This entry was posted in Uncategorized and tagged bad moon books, halloween, horror, the last night of october. Bookmark the permalink.