In a few weeks, Midnight Echo Issue 1o will be released in paperback and digital formats and for me, it will be quite a milestone.

The magazine, which is produced with pride, by the Australian Horror Writers Association, has been a personal challenge ever since I first joined the organisation and saw the first issue in 2009.

Over the last nine issues, the magazine has created a name for itself, publishing many well-known authors, including Jonathan Maberry and Graham Masterton, as well as highlighting some of Australia’s up-and-coming authors.

Issue 10 – a ghost story themed volume, edited by Australian  Shadows Award-winning editor Craig Bezant, will contain my short story “Mother’s House”. I don’t want to reveal anything about it’s premise, but I’m very excited to finally have some prose in the magazine after a number of years of producing art for its pages.

Better yet, there’s also a feature interview with myself and authors Rocky Wood and Lisa Morton on how our Bram Stoker Award(R)-winning graphic novel, “Witch Hunts: A Graphic History of the Burning Times”, came to life!

The Issue will also feature the final part of the vampire comic, “Allure of the Ancients: The Key to His Kingdom”. Written by my friend Mark Farrugia, this is a comic series which first appeared way back in Issue 7 and while I’m sad to see it go, it was also a pleasure brining Mark’s amazing story to life. I’ve included an image of the first page of the final part for your viewing pleasure below. For those who have been following the series since Issue 7, this page should bring back some memories 🙂 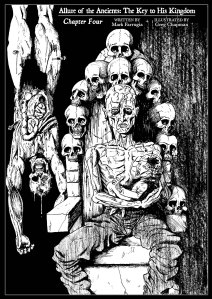 So if you love your horror fiction, please consider picking up a copy of Issue 10, or for that matter, subscribing to the magazine. You won’t be disappointed.

Midnight Echo Issue 10 is scheduled for release on December 29.

I am a dark fiction author and artist from Central Queensland, Australia. I've penned four novellas: Torment, The Noctuary, Vaudeville and The Last Night of October. I also illustrated the Bram Stoker Award-winning graphic novel, Witch Hunts: A Graphic History of the Burning Times.
View all posts by darkscrybe →
This entry was posted in Uncategorized and tagged ahwa, allure of the ancients, lisa morton, mark farrugia, midnight echo, rocky wood. Bookmark the permalink.