My debut collection, Vaudeville and Other Nightmares, is now available in paperback from Black Beacon Books!

Selecting the 24 tales for this novel-length collection was a challenge, but I feel the tome will provide horror readers a broad scope of dark delights and maybe seed a few new nightmares of their own.

The print edition can be purchased via this LINK. The retail proice is $USD12.50 plus postage and handling. The digital edition is also available for pre-order from Smashwords for $USD4.99.

If you stay tuned to the official launch page on Facebook, you’ll soon see details of a very special competition to celebrate the release.

Early reviews for Vaudeville and Other Nightmares have been positive, and of course, my peers have also had some nice things to say:

“Greg Chapman is a new voice in horror and brings fresh angles to our genre, which too often recycles unoriginal stories. There is a cinematic quality to his storytelling, which lodges itself in your imagination, deepening the bold and disturbing tales he delivers. Approach Vaudeville and Other Nightmares with care and whatever you do, leave the lights on!” – Rocky Wood, Bram Stoker Award (R) winning author of Stephen King: A Literary Companion

“I’ve been an unabashed fan of Greg Chapman’s extraordinary fiction since I read his first book, The Noctuary, and what I said about that book applies to all of his work – it’s elegant, violent, witty, and packs an emotional wallop. This collection should provide a feast for gourmets of horror who appreciate an artfully crafted, disturbing tale.” – Lisa Morton, multiple Bram Stoker Award winning author of Zombie Apocalypse: Washington Deceased

“Vaudeville and Other Nightmares is a murderer’s row of horror stories. Greg Chapman’s dark and original visions of ghosts, good versus evil, horrific entities, and worlds gone mad are inventive, chilling, and rich with unique imagery. An utterly irresistible collection.” – James Chambers, author of The Engines of Sacrifice and Three Chords of Chaos

You can also read an interview with me over at the BBB website.

I hope you’ll consider giving my collection a look as we get closer to the best time of year! 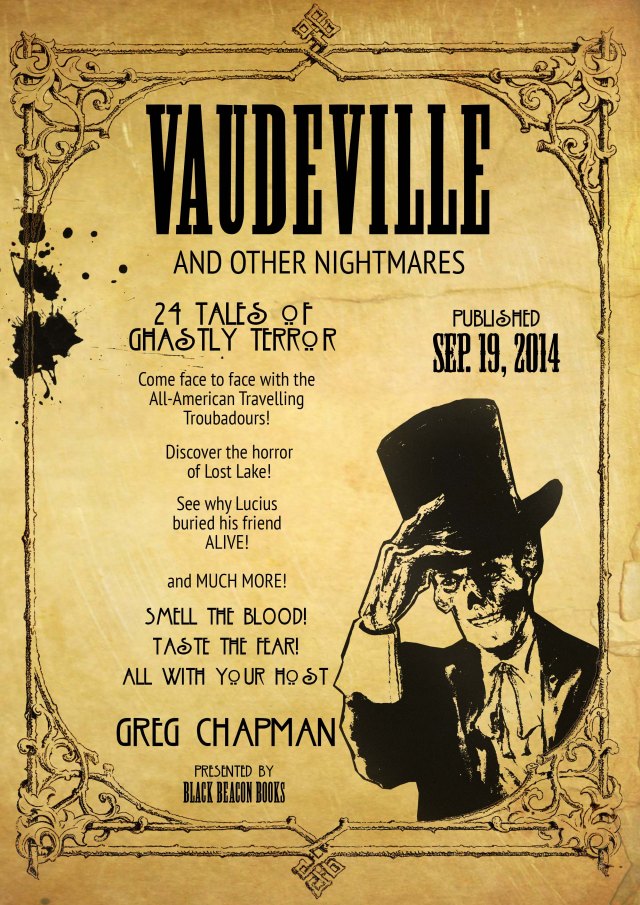 Two-time international Bram Stoker Award-nominee®*, Greg Chapman is a horror author and artist based in Queensland, Australia. Greg is the author of several novels, novellas and short stories, including his award-nominated debut novel, Hollow House (Omnium Gatherum) and collections, Vaudeville and Other Nightmares (Specul8 Publishing) and This Sublime Darkness and Other Dark Stories (Things in the Well Publications). He is also a horror artist and his first graphic novel Witch Hunts: A Graphic History of the Burning Times, (McFarland & Company) written by authors Rocky Wood and Lisa Morton, won the Superior Achievement in a Graphic Novel category at the Bram Stoker Awards® in 2013. He is also the current President of the Australasian Horror Writers Association. Greg lives in Rockhampton with his wife and their two daughters. * Superior Achievement in a First Novel for Hollow House (2016) and Superior Achievement in Short Fiction, for “The Book of Last Words” (2019)
View all posts by darkscrybe →
This entry was posted in Uncategorized and tagged black beacon books, vaudeville and other nightmares. Bookmark the permalink.