The novel that (almost) never was

There were moments when I was close to throwing my novel into the trash icon on my laptop and forgetting I’d ever dreamed it up.

Thankfully the little devil on my shoulder told me to “finish the damn thing” and this week I completed the first draft of my novel, tentatively titled The Temple of Folly. 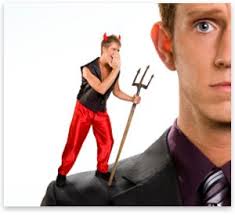 This was an on again off again novel; one that started inside a notebook about twelve months ago and I later shelved because I didn’t really want to write it at all. The previous novel I’d written had been rejected after almost a year of waiting and it was a real kick in the guts. I was ready to throw in the towel with writing altogether.

The little devil on my shoulder slapped me around and told me to grow a pair. He reminded me of one of Neil Gaiman’s rules that graced the poster on my wall –

“Finish what you’re writing. Whatever you have to do to finish it, finish it.”

So that was what I did. I took out the notebook with the scrawl of the first few chapters that I’d written and started to type it up into a fresh word document. I hate writing long pieces straight into a computer because I can’t type for shit, but as I did, the story started to form, characters were fleshed out and the end no longer seemed like a chore.

So I’ve written a haunted house novel. It wasn’t as long as I wanted it to be (about 56,000 words), but I FINISHED it. It’s currently in the hands of two trusted beta readers and I’m looking forward to hearing what they liked and especially what they didn’t. I’m actually excited about the fleshing out and editing to come because it’s a complete novel, not some half-finished draft, or sheafs of notes, but a WHOLE novel.

I’m very happy that the little devil talked me around.

One of the beta readers asked me for a brief synopsis and at first this made me cringe because who wants to write a goddamn synopsis – ever? Again the little devil poked me with his pitchfork.

So here’s the off-the-cuff synopsis. I hope it entices:

It was just the old house on the corner.

No one in Willow Street paid it any notice; not the disgruntled Campbell family next door, not Alice Cowley and her suicidal daughter, or Mr and Mrs Markham down the road.  Not even Darryl, the loner at number 70, who was abnormal himself, knew it was there. It was just old Kemper House, forgotten and seemingly abandoned as far as anyone knew.

Until it made itself known.

When the stench of death wafts from Kemper House through Willow Street, and comes to the attention of recent resident and newspaper reporter Ben Traynor, it will start a chain of horrors that will bring Kemper House’s curse into their own homes and lead others direct to its door.

Kemper House will not only haunt its neighbours, it will infect them with an evil that traverses time and space itself.

Two-time international Bram Stoker Award-nominee®*, Greg Chapman is a horror author and artist based in Queensland, Australia. Greg is the author of several novels, novellas and short stories, including his award-nominated debut novel, Hollow House (Omnium Gatherum) and collections, Vaudeville and Other Nightmares (Specul8 Publishing) and This Sublime Darkness and Other Dark Stories (Things in the Well Publications). He is also a horror artist and his first graphic novel Witch Hunts: A Graphic History of the Burning Times, (McFarland & Company) written by authors Rocky Wood and Lisa Morton, won the Superior Achievement in a Graphic Novel category at the Bram Stoker Awards® in 2013. He is also the current President of the Australasian Horror Writers Association. Greg lives in Rockhampton with his wife and their two daughters. * Superior Achievement in a First Novel for Hollow House (2016) and Superior Achievement in Short Fiction, for “The Book of Last Words” (2019)
View all posts by darkscrybe →
This entry was posted in Uncategorized and tagged neil gaiman, novel, the temple of folly. Bookmark the permalink.

3 Responses to The novel that (almost) never was