Winning in the time of COVID

Hey all, it’s been a while between newsletters and thankfully that’s mainly due to the fact that I’ve been busy creating comics, book covers, and fiction while dealing with the impacts of COVID-19.

We all know how tough it has been. It might have affected my day job with many of my co-workers being made redundant, but if anything, I’ve been able to distract myself with new art and stories.

And, in an attempt to stay positive I’ve decided to run a bit of a competition. Anyone who is subscribed to my newsletter will go into the draw to win signed paperback copies of my three novels – Hollow House, The Noctuary: Pandemonium, and Netherkind. More details below, so please, read on! 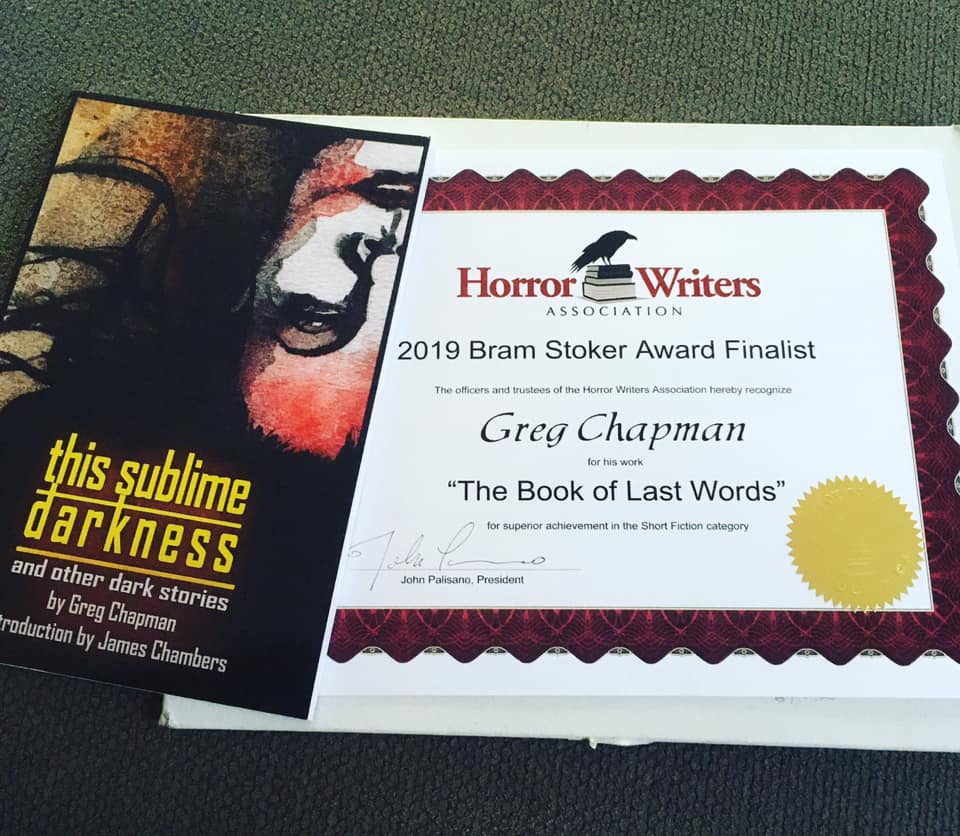 I’M STOKED ABOUT THIS MAIL DELIVERY
It took five months to arrive here in Australia thanks to COVID, but I was rather chuffed to receive the Bram Stoker Awards Finalist certificate for my short story, “The Book of Last Words”, from my collection This Sublime Darkness and Other Dark Stories. You can listen to Tales To Terrify’s audio rendition of the story, HERE

WINNING!
In other news, I recently won two separate art contests. One was through 99 Designs, to design a book cover for a spy novel, while the other was a logo for an upcoming horror-themed event in Florida. Check out the winning art below. 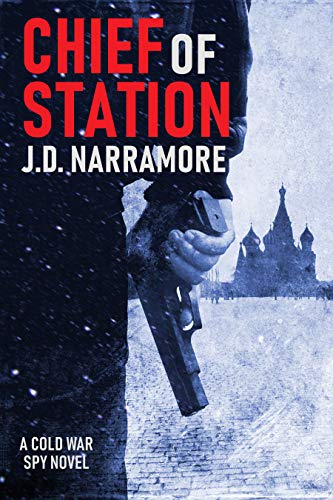 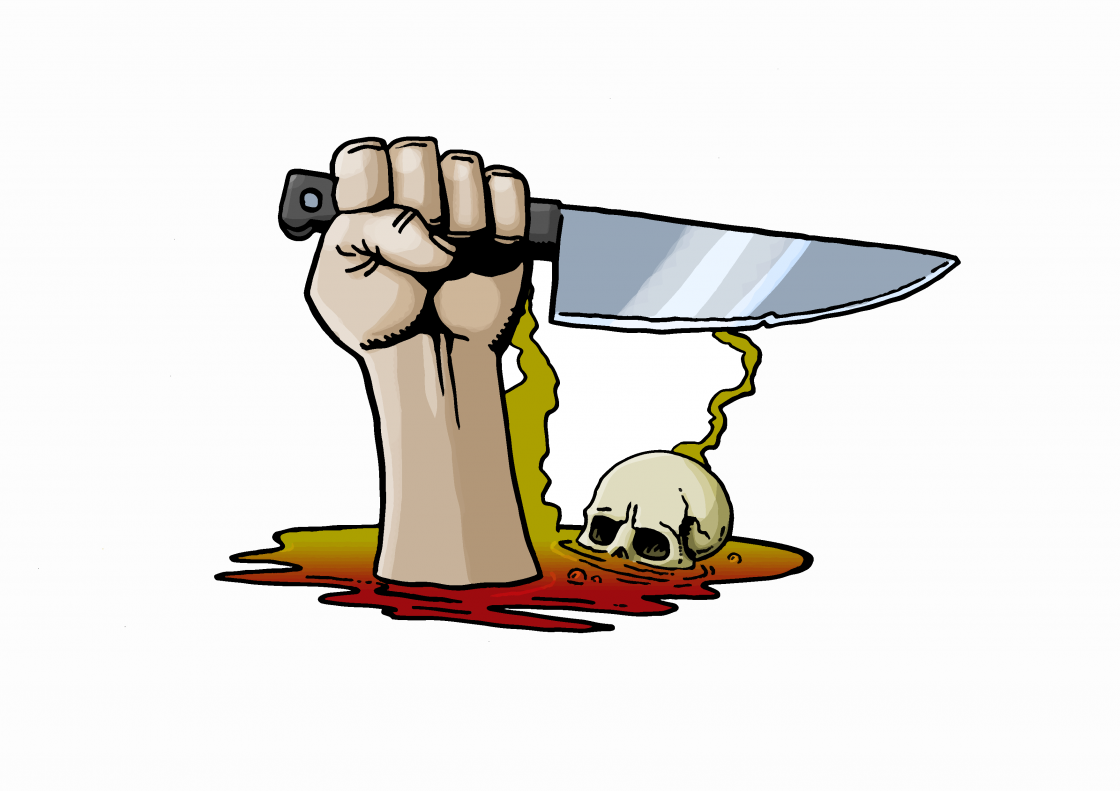 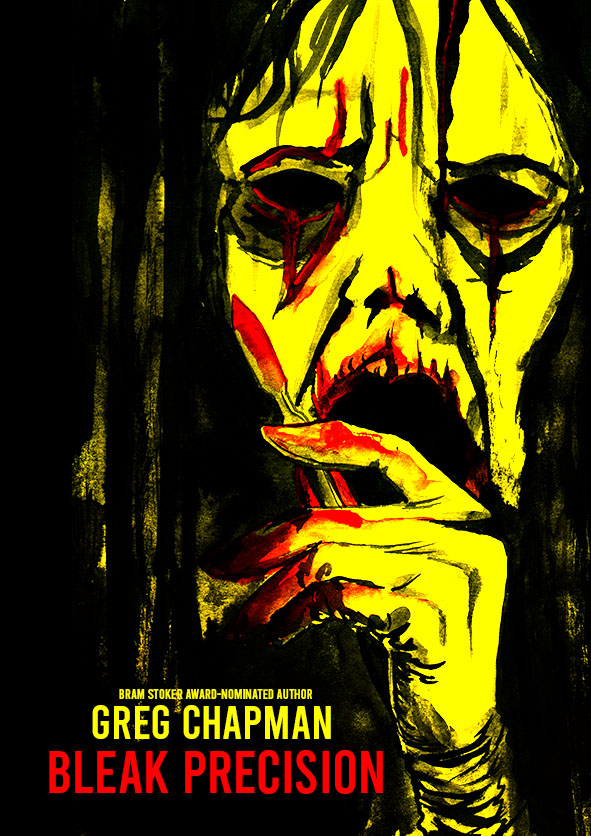 I recently released a ‘chapbook’ of short stories and art on Amazon.

Why did I do this? I guess I’m experimenting with self-publishing. I know that’s not for every author, but for me it’s fun putting these little packages together.

Below are a couple of reviews:

“This showcases the variety of ways Greg is able to deliver his stories and it is a prime way for people to check out his work. The standouts for me were ‘Kakophony’ and ‘Mongrel.’ The illustrations in this are amazing…” – Steve Stred, Kendall Reviews

“Chapman delivers on his promise, providing a literary mural of disturbing beauty in a concise and effective package.” – Rebecca Rowland, Rowland Books

I was recently interviewed as part of the Australian SF Snapshot Project. Every few years the Project team raises the profile of Australian authors about their latest works.

WHAT AM I SCARED OF?
I used to have vivid nightmares as a child. The dark terrified me. I believed all the imaginary things in the world were out to get me. Then I grew up.

I became a journalist and discovered how sometimes reality could be truly awful. Years before that though, I got a taste of that reality. At 15, I lost a childhood friend and wrote about this in my novella Vaudeville. Before that, I recall going to my grandmother’s funeral and later watching my grandfather struggling for breath with emphysema (I used some of that memory in my novella The Last Night of October). Just 10 years ago my mother died of breast cancer. I don’t have the nerve to write about that. In 2014, Rocky Wood, a man who took a chance on me to illustrate his graphic novel about the history of witches, died from ALS. He’d taken me to the World Horror Convention in the US – paying out of his own pocket – and gave me countless memories of just how amazing the horror community is. The following year my mother-in-law passed away. I’ve experienced a lot of grief in my life, and it’s probably one of the main themes I write about. Obviously, it’s my way of dealing with it.

More than 20 years ago I experienced atrial fibrillation for the first time and had to hospitalised. AF is something my dad has lived with most of his life. t wasn’t fun and it was probably the first time I thought about my own mortality. There was a point that I thought I would die. But then I grew up. Soon after, I met my wife and we had two beautiful daughters together. Sure I’m still a cynical complainer stuck fast in the middle of a mid-life crisis. but I feel like I can handle my fears.

Well, I did… until a few months ago.

In May, while working from home thanks to COVID-19, my eldest daughter Abbi started experiencing headaches and blurry vision. Being good parents, we took her to the GP and our worst fears came true – there was something going on in her brain. A cyst on her pineal gland was blocking the flow of cerebrospinal fluid. Within a few hours, we were getting ready to drive six hours to our capital city so she could have urgent endoscopic surgery. This was what scared me. I didn’t want my first-born child to die. Yet, strangely, I wasn’t panicking. All that past fear had prepared me and if anything I was numb. Somehow I knew everything was going to be alright. And it was.

My daughter’s surgery went like clockwork. The pressure on her brain diminished and her stay in the ICU was short-lived. The most upsetting aspect was COVID-19. The pandemic meant our visits with Abbi in the ICU had to be painfully brief. In fact, I was chastised by a nurse in the ICU for not getting permission to enter (my wife let me in the door as she was leaving). This was nothing compared to the pain my daughter’s younger sister experienced when we told her that she couldn’t visit at all. I’ll never forget the two of them crying during a Facetime chat.  This was reality hitting home all over again. And quite frankly, it sucked.

I worry for my children, about the pandemic, about whether a vaccine is even possible. I am truly scared for their future. These past six months have been the most productive of my life. I’ve created so many book covers, and two goddamn comics, with more to come. Last week I started writing some long fiction – for the first time in a very long time. So maybe being scared helped me find a way to reignite that creative spark. I’m glad it did.

What am I really scared of though? 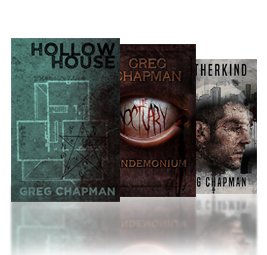 Because we all need a distraction at the moment, I’ve decided to run a bit of a competition. Subscribe to my newsletter for your chance to win. Winner announced 31 August. 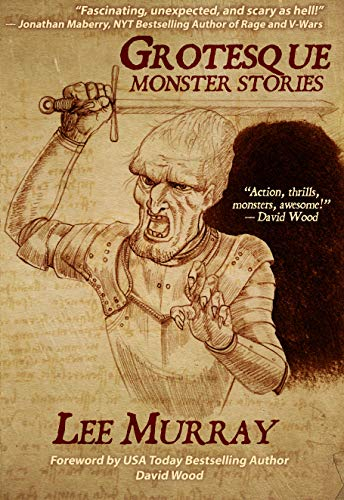 I had a blast creating the art for her cover, which called for a Renaissance, Da Vinci style sketch of one of the creatures. The book is selling like hotcakes and I’m honoured to have played a small role in its success.