The week that was…

What I’ve discovered this week is that Facebook is just another corporation, that doesn’t know the meaning of the words common sense. What Rocky, Lisa and I went through (censorship at its nastiest) is going to leave a bad taste in our mouths for years to come.

Witch Hunts was in the headlines for all the wrong reasons, but what it did show me was how influential people power (and specifically our friends in the horror community – you guys and gals rock!) can be. Thanks for going into bat for us!

Without you we probably wouldn’t have our page back. And while Facebook did ultimately do the right thing, they could have avoided all this by not doing the wrong thing in the first place!

But at least I am ending the month on a high note.

The digital version of the anthology A Killer Among Demons, published by Dark Prints Press is now available to buy with the paperback expected in 2-3 weeks and my favourite magazine – Midnight Echo released its 9th issue today!

The anthology contains my story “A Matter of Perception”, a sort of Law & Order: Special Victims Unit with a very thick coating of the fantastique. It’s touching and macabre all at once. I’m sharing book space with some amazingly talented authors, including William Meikle, Alan Baxter, Angela Slatter and
Stephen M. Irwin, just to name a few. I can’t wait to read it myself! 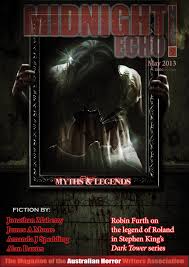 Midnight Echo Issue 9 is a real joy as I provided all the interior corner art, a full page piece for a rather well known author, the latest installment of my vampire comic with Mark Farrugia, Allure of the Ancients and a few other pieces of advertising that I created.

I’ve also been busy at the computer and created a book cover for a forthcoming e-book anthology from the Horror Writers Association. I believe it will be shown around at the upcoming World Horror Convention, so if you’re going, keep an eye out for it!

The other news is that Granite State College in new Hampshire USA, which has Witch Hunts as a textbook in its History 510 class recently sent me a copy of all the students’ essays on our book. I’ve been given permission by GSC to put all of the students’ comments together in a special publication. I’m about half-way through and I’ll provide a sneak peek of it soon.

Now that this mad week has gone, I’ll be counting down to June 15 for the Bram Stoker Awards in New Orleans to how Witch Hunts goes in the graphic novel category. Rocky and Lisa will be there, but sadly I’ll have to watch the webcast back here in Australia 😦

Good luck to all the finalists!

So unless Facebook tries to censor us again, you won’t hear from me until then!