Cover artwork for The Last Night of October

Roy Robbins, publisher at Bad Moon Books has made my Sunday!

He sent me the cover artwork for my forthcoming novella The Last Night of October.

Created by Luke Spooner, the artwork definitely captures the dark storybook feel of the novella and just screams Halloween.

The Last Night of October will be released on Halloween (obviously) and will include three interior illustrations by me (one of which you can see below) and an introduction by Bram Stoker Award-winning author and friend Lisa Morton. 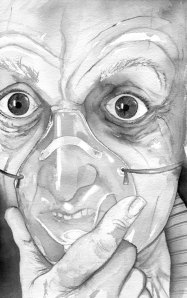 Here’s a synopsis of the tale:

Every year, on October 31st, a lone child has knocked on his door – a nightmarish reminder of a tragedy from Gerald’s past.As each Halloween came and went, Gerald has been able to keep his door locked and the monstrous memory at bay, but the ravages of emphysema have left him a disgruntled and feeble-minded old man.

When a new hospice nurse named Kelli arrives unexpectedly to replace his regular nurse on Halloween night, Gerald is caught unawares and before he can warn her, Kelli is inviting the threat into his home.The horrors that unfold will be no trick and the only treat the child will accept is the old man’s soul.

Before the night ends, Gerald will have no choice but to bring his dark secret into the light.

I’ll definitely keep you apprised of the progress of the book, but Halloween is certainly going to be great this year!

Two-time international Bram Stoker Award-nominee®*, Greg Chapman is a horror author and artist based in Queensland, Australia. Greg is the author of several novels, novellas and short stories, including his award-nominated debut novel, Hollow House (Omnium Gatherum) and collections, Vaudeville and Other Nightmares (Specul8 Publishing) and This Sublime Darkness and Other Dark Stories (Things in the Well Publications). He is also a horror artist and his first graphic novel Witch Hunts: A Graphic History of the Burning Times, (McFarland & Company) written by authors Rocky Wood and Lisa Morton, won the Superior Achievement in a Graphic Novel category at the Bram Stoker Awards® in 2013. He is also the current President of the Australasian Horror Writers Association. Greg lives in Rockhampton with his wife and their two daughters. * Superior Achievement in a First Novel for Hollow House (2016) and Superior Achievement in Short Fiction, for “The Book of Last Words” (2019)
View all posts by darkscrybe →
This entry was posted in Uncategorized and tagged bad moon books, fiction, greg chapman, horror. Bookmark the permalink.