Award-winning author and editor Lee Murray has hijacked my blog to talk about the killer cross-Tasman anthology she edited with Dan Rabarts, At the Edge. 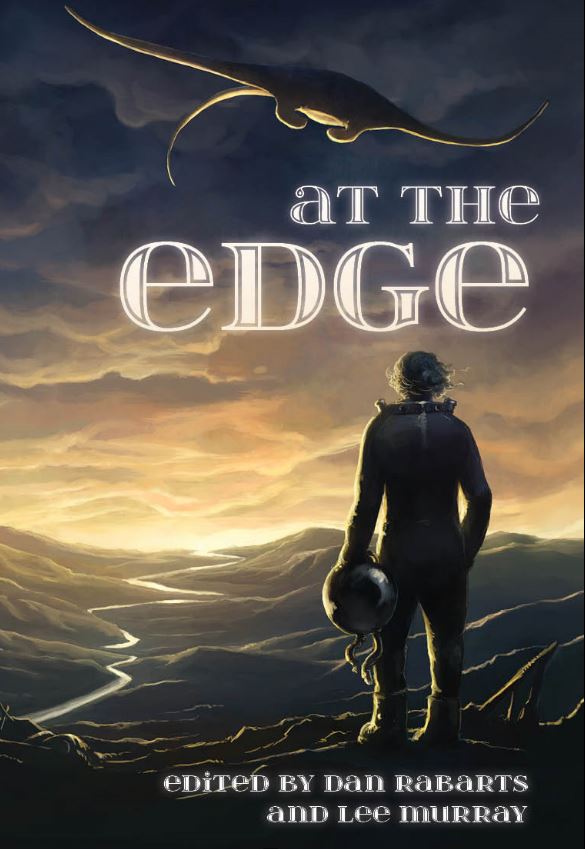 Down here in the Antipodes, we’re all immigrants of sorts. Either pushed or jumped from other lands, our ancestors ‒ some very recently ‒ decided to make the arse-end of the world their home. And that migration has an effect on the way we see things, slightly skew-whiff, because we’re examining the world from its underbelly. We’re not ashamed of our outlook. Not at all. In fact, we’re proud of our quirky perspective. So, when Dan Rabarts and I were contemplating the craziness of another anthology project to follow Baby Teeth, it made sense to us to explore that viewpoint, to look at what it is that makes Australian and New Zealand stories stand out and also stand together. We hoped that the anthology’s theme, At the Edge, would inspire writers to do just that.

So, what did we find?

One of the first things we noted was a focus on the environment, and in homage to that we anchored the anthology with two stories deeply connected to the land and its ability to sustain, opening with Jodi Cleghorn’s The Leaves No Longer Fall in which Annabel and her children live with other refugees amidst the boughs of a Moreton bay fig. They’re safe there for the moment, sequestered from the sun-stricken environment by walls of living glass. But the glass is failing, and now Jackson, Annabel’s dead husband’s brother, has turned up, asking her to go back to the place where she was betrayed, to fix the rot she’d nothing to with.

We closed the collection with AC Buchanan’s And Still The Forests Grow Though We are Gone, the apocalypse comes on slowly, smothering us in isolation, as kelp forests close in day by day. It’s a story of hopelessness and abandonment, relevant perhaps for castaways at the edge of the world.

Then Summer Wigmore tells of a river, a mighty rolling river, which serves as both a barrier and a gateway to something new in Back When the River had No Name, and the queen of disquiet, Shadows Award winner Debbie Cowens, brings us a Lovecraftian tale of inexorable horror purged up in the frills at the edge of the ocean in Hood of Bone.

Then there are the beasts. Carlington Black lulls us into a false sense of security with long balmy summer days where the thrum of cicadas drowns the sound of the kids playing in the back yard while the adults sit back, languid in the heat, and watch the days float by. And if farming news bores the pants off you, then you haven’t read David Steven’s horror gem, Crop Rotation.

Being the first countries to see the sun each day, the lands sitting firmly beneath the Southern Cross, gives us a unique notion of the universe, made clear in AJ Fitzwater’s Splintr, a tale of the last days of the earth as told by its sole witness; a story told in prose that is as sharp as glass. That unique view occurs again in EG Wilson’s 12-36, an Antipodean Firefly if ever there was one. In Richard Barnes’ The Great and true Journey, a group of god-forsaken pilgrims, enhanced or otherwise, strive for an impossible nirvana on the frozen ice plains of Tunga.

My dad always said we were a local call to heaven down here at the bottom of the world and Anthony Panegyres’ supernatural fantasy Crossing, which operates in the thin line between life and death, explores this very notion, as does Tom Dullemond’s gripping futuristic military thriller, One Life, No Respawns. Equally chilling, but quieter in its approach is David Versace’s Seven Excerpts from Season One, where the dead flirt with the living between frames.

There are stories steeped in mythos, plucked from the land itself. JC Hart’s Hope Lies North is one such story. Inspired by the landscape on State Highway 3 near Awakino, it’s a contemporary parable of the earth mother taking back her people. Likewise, in Keira McKenzie’s In Sacrifice We Hope, two boys go in search of an urban legend amid the toxic sludge of wastelands on the outskirts of Perth. Paul Mannering creates a new world that is a startling blend of all things Pasifika in The Island at the End of the World, a story of family and of renewal.

Of course, any anthology from the Antipodes must forcibly include tales about resilience and the indomitable nature of the spirit, the notion that you-can’t-keep-a-good-man down as seen in Martin Livings’ Boxing Day. Or, in the case of Octavia Cade’s Responsibility, you can’t keep-a-dead-chicken-down. Or Joanne Anderton’s Street Furniture, where it’s about girls and goblins and the vagaries of ‘interior’ design. Still others went a step further to explore what happens when the burdens become too much, giving us stories from the edge of madness. Eileen Mueller’s Call of the Sea, Shell Child’s Narco, and AJ Ponder’s chilling contemporary fairy tale, BlindSight are examples.

So what did we learn? Well, we weren’t disappointed. Anything but. Every story in At the Edge, indeed all the stories submitted, had that deeply embedded antipodean spirit we’d been hoping for. They were “infused with that bloody-minded quality that embodies the

Antipodes, a resilience inherent in nations born of warriors and wanderers, the children of whalers, convicts and miners: people not afraid to roll up their sleeves, or strike out for new territories, innovative resourceful sorts prepared to find meaning in the expanses out here at the edge of the world.”

At the Edge, Dan Rabarts and Lee Murray (eds) 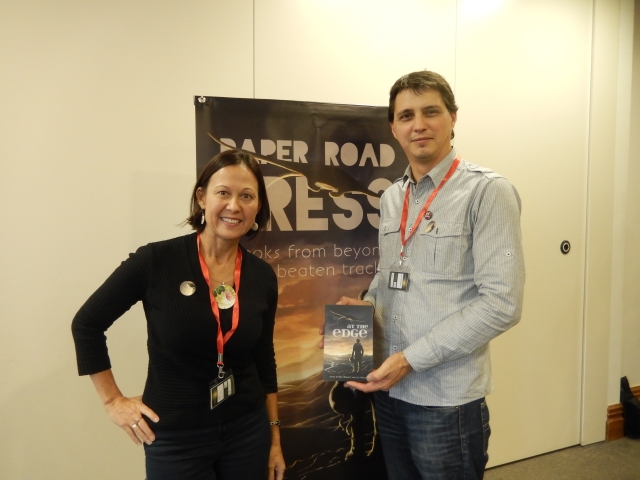 With six pointy Sir Julius Vogel Awards on her bookshelf, and an Australian Shadows trophy in shared custody with co-editor Dan Rabarts, Lee’s most recent work is the military monster thriller Into the Mist (Cohesion Press). The author of several novels, shorts stories and novellas, Lee is proud to be the editor of six fine anthologies of speculative fiction. www.leemurray.info

Dan Rabarts is a multi-award-winning short fiction author and editor, podcast narrator, and sailor of sailing things. He was the recipient of New Zealand’s Sir Julius Vogel Award for Best New Talent in 2014, and the co-editor of Baby Teeth – Bite-sized Tales of Terror, with Lee Murray, which won the SJV for Best Collected Work and the Australian Shadows Award for Best Edited Work that same year. Dan and Lee continue to collaborate on projects, including a crime-horror novel set in a dystopian near-future Auckland. His SFFH short stories have appeared in venues such as Beneath Ceaseless Skies, Andromeda Spaceways Inflight Magazine, and Aurealis, on the Hugo award-winning podcast StarShipSofa and others, and in the anthologies Regeneration, In Sunshine Bright and Darkness Deep, and The Mammoth Book of Dieselpunk, to name a few. He is one head of the writing band Cerberus, which includes fellow kiwi author Grant Stone and a certain hairy mango, Matthew Sanborn Smith. Find out more at www.dan.rabarts.com.

2 Responses to Guest post: Lee Murray “At the Edge”