I’ve interviewed fellow scribe Brian W. Matthews about his novels, why he writes and what horror means to him. He’s also a teensy bit shy. Seriously, he’s a top writer and you should all check out his Forever Man series and his latest work, The Conveyance.

What inspired The Conveyance – why did you write this story?

After two books with the same central characters, I wanted to try something different. Forever Man and Revelation are both told in the third person with multiple points-of-view and several flashback sequences. For Conveyance, I wrote in the first person with only one point-of-view, and I limited my use of flashbacks. While this resulted in some limitations in the narrative, I found it exciting to use a different approach to my storytelling. As to the subject matter, I’ve always been interested in blending genres, and I felt combining horror with science fiction would result in a compelling story.

This is your third novel, your first two being part of a series. What lessons have you learned since writing Forever Man? Was this stand-alone novel, The Conveyance, harder or easier to write? 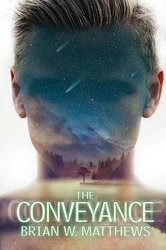 Probably the biggest lesson I learned from writing Forever Man was my need to trim my descriptions and keep the action flowing. I tend to be overblown in my descriptions of people and places. That dragged down the pace of the story. I blame my insecurity as a new writer: I had to prove to myself that I could “write like a pro.” The problem was, I wasn’t writing like a pro. By the time it came to write Conveyance, I had a better handle on pacing and flow, and I believe it is reflected in the story. As is stands today, Conveyance is a stand alone novel; however, that may change in the future. I left myself a few loopholes where I could squeeze out another book if I deem it is worth writing. Finally, Conveyance was easier to write. I’m more experienced as a writer. I have a greater sense of confidence in my skills. And I’m making far fewer newbie mistakes. All that helps to improve the writing experience for me.

Many authors these days choose to come up with a series of books around one character – what was the appeal for you? Will there be another Forever Man novel in the future?

The inspiration for the Forever Man series came from two other series of books: F. Paul Wilson’s Repairman Jack novels, and an older fantasy series called The Belgariad, written by the late David Eddings. Both deal with central characters that exist over a span of books, and the latter attempts to humanize what, in that fantasy world, are near-mythical characters. Having a central character like Bart Owens in the Forever Man series gives me a go-to person when an idea strikes. It also allows me to take a break from that character and explore other ideas and storytelling approaches, while leaving the door open for more Forever Man novels.

Tell us a bit about Brian W. Matthews the writer and what he does when he’s not writing?

As a writer, I’m rather quiet. I simply do my job and get on with the next project. I enjoy meeting other writers, hearing them speak about the craft, and generally being part of a wonderful community of thoughtful and generous people. When I’m not writing, I have a day job that keeps the bills paid. I’ve recently remarried, so my wife and I are looking forward to traveling the world over the next few decades. And I enjoy being both a father and step-father. Family is important to me.

Social media is a necessary evil for authors these days. How do you manage self-promotion?

Self-promotion is difficult for me. Being shy, I feel awkward going on Facebook or Twitter to promote my latest work. I almost want to duck under my desk and hide. But in this business, promotion is everything, so I buckle down and ignore those uncomfortable feelings and look at it as part of the job. I have to admit, self-promotion does get easier with time, though I doubt I’ll ever be comfortable with it.

What does horror fiction mean to you as a reader and a writer?

Horror is more about love than it is about fear. Horror is a mechanism by which writers show how love can overcome so many obstacles. Sometimes that can be lost on readers, or even on writers. For me, I start with loving and caring protagonists, and then I use the horror part to put more and more pressure on them. I get curious about how they will react, what traits end up coming out as strongest. The process fascinates me, and it fascinates me, it may well fascinate a reader. What I think demeans horror fiction the most, I believe, is the horror movie, the “blood for the sake of blood” approach that removes most of what makes great horror fiction great. Truly great horror fiction is so much more than blood and guts.

What’s next for you?

Next up is a third Forever Man novel. I left a massive cliffhanger at the end of Revelation, and it would be unfair to leave readers wondering what’s happening by stepping away from it for too much longer. That will likely be the last Forever Man novel for a while. I have a few other ideas, including dabbling in other genres, that I would like to explore more fully.