Hi all, and thanks again for reading. There’s been quite a bit happening this past month, so read on and I might even give you a chance to win a digital copy of one of my books!

The biggest announcement this month was declaring my involvement in Crystal Lake Publishing’s forthcoming non-fiction anthology, It’s Alive: Bringing Your Nightmares to Life. 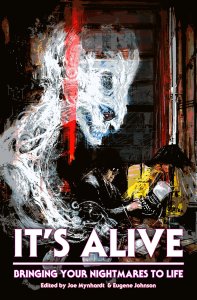 This is a massive tome, edited by Eugene Johnson and Joe Mynhardt, that is essentially writers helping writers by providing insights and tips into the writing craft. But these aren’t just any writers. Take a look at just some of contributing authors announced so far:

My essay centres on how I penned my debut novel, Hollow House and how I’d agonised for years in taking the leap to write it.

The anthology will be released on December 14 and it’s already picking up some rave reviews, so if you’re a writer, you should definitely have this on your shelf.

The return of the short story collection

Back in 2014, I had my debut short story collection published – Vaudeville and Other Nightmares and I’ve decided to resurrect it with a new look, and new(ish) stories. 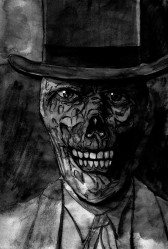 To be published by Specul8 Publishing here in my hometown of Rockhampton, the new edition will feature 30 stories, including the novella Vaudeville, with each story illustrated by yours truly.

The book is expected to be released around April 2019, so please watch this space for more details.

But to give you a taste of what to expect I’ve included an image of one of the pieces of internal art opposite. 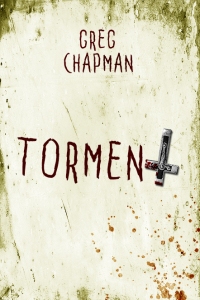 And finally, the re-release of my very first published novella, Torment, happened this month. The fine folks at Omnium Gatherum Books have done a fantastic job giving this story a new lease on life.

Available now in digital and paperback formats, the novella is a creepy haunting/exorcism tale set in Scotland.

The Horror Fiction Review has said that “Torment features some genuinely scary moments and keeps you guessing…” so I hope you’ll check it out!

Horror is actually good for you!

I’ve always maintained that watching (and reading horror) can be beneficial to your health and this article about a university study into the health benefits of watching horror flicks supports that view.

Research has found that watching horror movies releases neurotransmitters, which not only increase brain activity, but expand our ability to think! It also apparently burns as much calories as taking a 30-minute walk!

There’s been a number of issues with Amazon and Australia of late and (until recently) it wasn’t exactly good news if you’re an author, publisher, (or a customer).

So last year the Australian Government decided to impose GST (Goods and Services Tax) on Amazon.com for goods purchased from their site and shipped to Australia. In response, Amazon restricted access to the Amazon.com site and set up an Australian-based site Amazon.com.au. The issue meant some items were not available and publishers were no longer able to ship direct contributor copies to their Australian-based authors without incurring an additional cost.

The good news is that Amazon.com appear to have since waived that decision to exclude Australians from the .com site. But I’m still not sure whether publishers can send books direct to Australia. Hopefully some clarification will be available on that soon.

The last month I’ve been playing around with different medias, watercolour, pen and ink and just the good old HB pencil. Here’s some of the results: 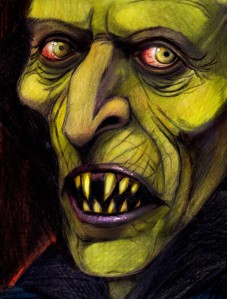 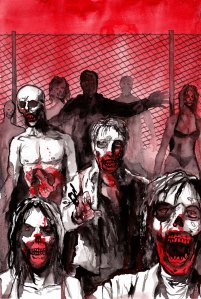 So I work at a university and their engineering labs have a bunch of 3D printers. Because they’re always looking for a challenge, I asked if they could print a few horror-themed items for me that I could paint. Check out the results below!

Want to win a digital copy of my Bram Stoker Award-nominated novel, Hollow House? Just subscribe to my blog to go into the draw.

The lucky winner will be announced in next month’s blog – just in time for that annual visit from Krampus! 🙂

Two-time international Bram Stoker Award-nominee®*, Greg Chapman is a horror author and artist based in Queensland, Australia. Greg is the author of several novels, novellas and short stories, including his award-nominated debut novel, Hollow House (Omnium Gatherum) and collections, Vaudeville and Other Nightmares (Specul8 Publishing) and This Sublime Darkness and Other Dark Stories (Things in the Well Publications). He is also a horror artist and his first graphic novel Witch Hunts: A Graphic History of the Burning Times, (McFarland & Company) written by authors Rocky Wood and Lisa Morton, won the Superior Achievement in a Graphic Novel category at the Bram Stoker Awards® in 2013. He is also the current President of the Australasian Horror Writers Association. Greg lives in Rockhampton with his wife and their two daughters. * Superior Achievement in a First Novel for Hollow House (2016) and Superior Achievement in Short Fiction, for “The Book of Last Words” (2019)
View all posts by darkscrybe →
This entry was posted in Uncategorized and tagged 3D printing, amazon, crystal lake publishing, fiction, horror, omnium gatherum books, specul8 publishing. Bookmark the permalink.