Posted on November 3, 2018 by darkscrybe

I hope you had a fantastic Halloween because I sure did! Here in Australia, Halloween is starting to take hold. For the past four years my family and I have put a yard haunt display on in our street and this year, we attracted more than 600 trick r treaters. Ten other houses also participated with their own haunts, so it was great seeing so many people in costume coming out and having fun.

Check out some photos of my yard haunt below. Everything you see here is handmade, including the giant spider, which was a labour of love! And yes, that’s me in the horrible zombie mask! 🙂 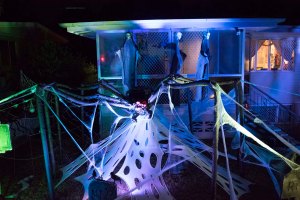 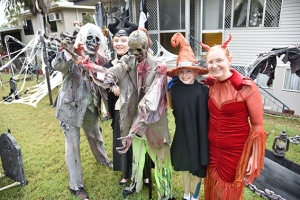 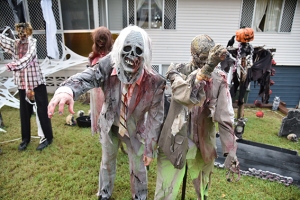 Here’s a story I wrote to send a chill up your spine for the most wonderful time of the year (artwork is also by yours truly!) I like playing with the emotion of grief in my stories and I’ve always wanted to flip the trope of pumpkin-carving on its head. Enjoy!

To many, Halloween was the one night of the year when the dead could return to the land of the living.

Michael had never believed in such a superstition, but he was willing to accept anything just to have her back.

The shovel was like a stone in his hands, an extension of his weary body, his anguished soul.

He stared at the grave, read the words on the tombstone through tear-streaked eyes:

The thought of his daughter, rotting away six feet under, sent waves of sadness through him and his legs almost giving out beneath him.

He only wanted to hold her again.

A gaggle of laughter made Michael turn and he glimpsed a quartet of costumed children skipping alongside the fence surrounding the cemetery. To them, Halloween was nothing more than a sugar high, a flight of fancy.

To Michael, it was the day his only daughter took her own life.

Alexandra had been one of a spate of suicides on Halloween – thirty-one in fact – and the great loss had always remained unanswered. A wound that refused to heal.

His mind dragged him back one year to the day, to that terrible instant. To the kitchen spattered with blood and the message she’d left on the face of the pumpkin, a single word she’d carved with a kitchen knife before she used it on herself:

The memory flashed away and Michael turned back to consider her grave, to contemplate the task ahead.

“I’m sorry baby…” he said, his voice a whisper lost in the fog.

The shovel stabbed at the earth, SHUK-SHUK-SHUK, over and over. He felt the cold sweat running down her back and found it easy to visualise Alexandra’s blood trailing from her wrists. It urged him on, the shovel carving a path to her through the dark soil. Time passed and after a while, the blisters on his hands burst and eased from burning into numbness. The only feeling left to feel. Was that how Alexandra felt in her final moments?

The light penetrated the blackness inside his head and he was wrenched back to that horrible day. Alexandra’s body on the gleaming steel table, her skin like fresh snow. He recalled hearing the detective’s voice, explaining that she was one of many to die the same way, the only clue being that solitary word – HARVEST. But how could carving a pumpkin have led to suicide?

Another flash left his head swimming, but soon he felt himself sinking inch by inch into the ground, edging deeper, closer to his little girl. He studied his work and was surprised by how symmetrical his digging had been. The edges clean and straight, like the lines of a door. He was building a door in the hope that she’d be waiting on the other side.

The clang of steel on wood jolted Michael out of his melancholy and for the first time in many months, hope reawakened him. He dropped to his knees and swept the dirt from the lid of the coffin. Panting, he retrieved his knife and pried open the door.

Only to find darkness.

No Alexandra, adorned in her favourite dress.

Not even her bones.

He stood in a daze of disbelief. She should be here, he thought. He knew he’d put her in the ground. His heart still had the scar to prove it.

The black mouth of the coffin mocked him.

He grabbed the shovel from the dirt in a rage and smashed it into the coffin, again and again, the wooden frame shattering to splinters. He cried out into the October night, hoping his daughter or anyone would hear his pain and put him out of his misery.

Freezing breath ran across the back of his neck and Michael about-faced to find the apparition had been standing behind him. He stumbled and fell into the coffin, its walls intact enough to contain his terrified soul.

Alexandra stood over him, arms outstretched and clutching the pumpkin, which was now emblazoned with putrid rot. Yet the word HARVEST was still plain to see. Protruding from its flesh was the same kitchen knife, gleaming like firelight. Fresh blood spilled from Alexandra’s wrists and vacant eyes. Tears of pain. She spoke not a word, but her blood and that word told him everything.

Halloween was a time of HARVEST.

His daughter’s eyes implored him to take the knife and with the steadiest of hands, he plucked it from its resting place. He was willing to add his soul to the collection. The knife’s kiss filled him with relief and his blood mingled with hers.

The edges of the hole Michael had created collapsed then, toppling down like two halves of the Red Sea onto father and daughter. The black door closed in on their combined grief forever.

Alexandra had always known the truth about Halloween, and finally, Michael did too.

Through the eye of the beholder 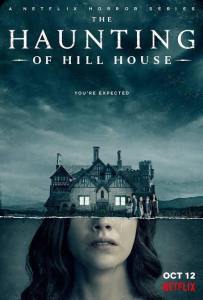 I recently binged Mike Flanagan’s The Haunting of Hill House TV series on Netflix. I found this show genuinely fascinating and creepy. “Horror with heart” is the best way to describe it. The character development and production values were second to none. The way the supernatural elements intertwined with this poor tormented family’s real-life trauma was so very well crafted. Some might not agree with the ending but I thought it was fitting and powerful. I highly recommend you check out this show. Check out the trailer!

Another Netflix show I’m also loving is The Chilling Adventures of Sabrina. This is a really creepy show with a great cast and production values. Best of all it’s a whole lot of fun and thankfully is nothing like the 90’s sitcom. Check it out.

Two titles I recently read and enjoyed were Baby Teeth by Zoje Stage and Flight or Fright, edited by Stephen King and Bev Vincent.

I’m currently preparing edits on my third novel, tentatively titled Skin Deep. This book, which is urban dark fantasy and poses the question of whether monsters can have souls, will be published by Omnium Gatherum Books mid-2019.

My artwork graces the cover of the latest issue of Morpheus Tales. It’s a bit of digital manipulation on my part and I’m glad with how it turned out. I like taking old photographs and twisting them to suit my purposes. You can pick up a copy of this magazine HERE 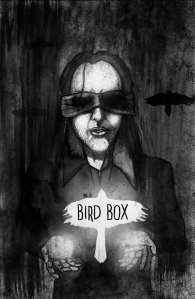 I’m a huge fan of Josh Malerman’s writing, particularly his novel Bird Box, which will soon be released as a film, starring Sandra Bullock and John Malkovich on Netflix. It’s a fantastic tale that takes paranoia to it’s limit. I was inspired to create some artwork for it and Josh liked it so much he shared it on his Facebook feed. If you haven’t read Bird Box, I highly recommend that you need to correct that immediately! Check out the trailer for the film!

A couple of covers I designed for Matthew Tait and Christian Saunders. 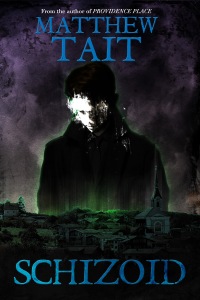 Omnium Gatherum Books in the US recently re-released my post-apocalyptic novella, The Followers. Originally titled The Eschatologist, this story is one of two opposing sides of faith – secular faith and faith in one’s self. It’s a survival story in the keenest sense of the word. I also created the cover art and interior illustrations for it. OG will also be re-releasing my very first novella Torment, which is my take on an exorcism tale but set in the Scottish Highlands. Horrible Books Reviews had this to say about it: “A story of family, sacrifice, and the scary idea that even in a world that has completely fallen apart there will always be a lunatic fringe.” You can buy a copy in ebook or paperback at Amazon

Specul8: The Central Queensland Journal of Speculative Fiction recently released its fifth edition, a Halloween special called Behold the Nightmare. It contains my tale, “Left on October Lane” which is about a young boy escaping the impact of domestic violence on Halloween night. You can buy a copy HERE 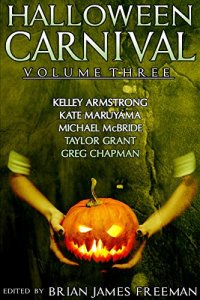 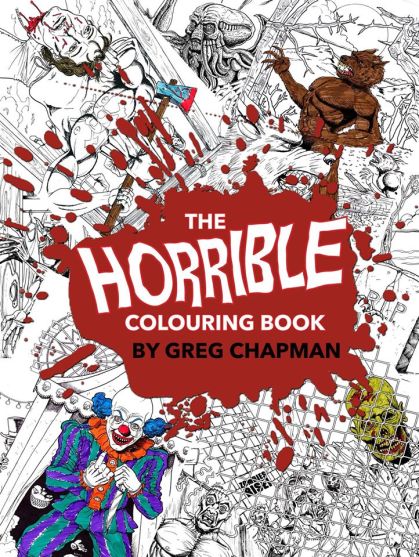 Two-time international Bram Stoker Award-nominee®*, Greg Chapman is a horror author and artist based in Queensland, Australia. Greg is the author of several novels, novellas and short stories, including his award-nominated debut novel, Hollow House (Omnium Gatherum) and collections, Vaudeville and Other Nightmares (Specul8 Publishing) and This Sublime Darkness and Other Dark Stories (Things in the Well Publications). He is also a horror artist and his first graphic novel Witch Hunts: A Graphic History of the Burning Times, (McFarland & Company) written by authors Rocky Wood and Lisa Morton, won the Superior Achievement in a Graphic Novel category at the Bram Stoker Awards® in 2013. He is also the current President of the Australasian Horror Writers Association. Greg lives in Rockhampton with his wife and their two daughters. * Superior Achievement in a First Novel for Hollow House (2016) and Superior Achievement in Short Fiction, for “The Book of Last Words” (2019)
View all posts by darkscrybe →
This entry was posted in Uncategorized and tagged art, australia, bird box, fiction, halloween, horror, josh malerman, mike flanagan, netflix, Stephen King, the haunting of hill house, zoje stage. Bookmark the permalink.