I’m proud to announce the news that Omnium Gatherum books will be releasing my third novel, NETHERKIND in May! 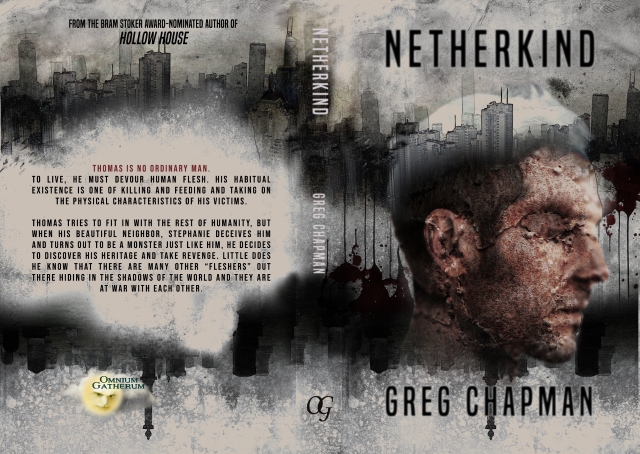 This is my first foray into urban dark fantasy and is a work I’d dipped into on and off over the past decade. It’s also the longest thing I’ve penned so far, at just over 85,000 words. It’s a pretty deep and meaningful work: an exploration of whether a monster can have a soul and a destiny that means something beyond killing. That we’re more than just flesh. It’s full of shape-shifting creatures, flesh-eating creatures, occultists, bounty hunters, all centred around an underground war and a soul-searching cannibal with a conscience. It was originally an unpublished short story that I expanded into a novel.

Here’s the synopsis of the novel:

Thomas is no ordinary man.

To live, he must devour human flesh. His habitual existence is one of killing and feeding and taking on the physical characteristics of his victims.

Thomas tries to fit in with the rest of humanity, but when his beautiful neighbor, Stephanie deceives him and turns out to be a monster just like him, he decides to discover his heritage and take revenge. Little does he know that there are many other “Fleshers” out there hiding in the shadows of the world and they are at war with each other.

I also created the cover art and I also had a real blast putting it together. I’m also really glad to be working with Omnium Gatherum again. They published my debut novel Hollow House in 2016 and also re-released my novellas The Followers and Torment last year.

You can pre-order the paperback now via OG’s website HERE, or the Kindle version HERE. I hope you’ll give it a whirl when it comes out on May 6.

Two-time international Bram Stoker Award-nominee®*, Greg Chapman is a horror author and artist based in Queensland, Australia. Greg is the author of several novels, novellas and short stories, including his award-nominated debut novel, Hollow House (Omnium Gatherum) and collections, Vaudeville and Other Nightmares (Specul8 Publishing) and This Sublime Darkness and Other Dark Stories (Things in the Well Publications). He is also a horror artist and his first graphic novel Witch Hunts: A Graphic History of the Burning Times, (McFarland & Company) written by authors Rocky Wood and Lisa Morton, won the Superior Achievement in a Graphic Novel category at the Bram Stoker Awards® in 2013. He is also the current President of the Australasian Horror Writers Association. Greg lives in Rockhampton with his wife and their two daughters. * Superior Achievement in a First Novel for Hollow House (2016) and Superior Achievement in Short Fiction, for “The Book of Last Words” (2019)
View all posts by darkscrybe →
This entry was posted in Uncategorized and tagged horror, Netherkind, novel, novella, omnium gatherum books. Bookmark the permalink.